The new district for the small vicinity called Hedehusene at Zealand in Denmark is growing rapidly, and among the many contractors taking part in the project is the company Gorm Hansen from nearby Roskilde.

The company is involved in several projects in the area, and one of the tasks is to lay out a new cycle path.

For precisely this type of task, the construction company has been wearing the development hat. The company wanted a solution that would not only make work easier with fewer staff-hours as a result, but also be a useful solution.

The desire for a smart solution for laying gravel in paths sent blacksmiths from contractors in the inventor's corner.

The new machine system is built on a Hydrema 912 MultiChassis, where we have mounted a sand conveyor from the machinery manufacturer Bredal. That in itself is an old feature. Usually, there is a long conveyor belt at the back to distribute the material. The Bredal conveyer allows us to adjust the amount it feeds the box with, regardless of the driving speed. It provided a good starting point, but we only had the conveyor belt for it, says Brian Vinkelgaard, a blacksmith at Gorm Hansen A/S.

Slope to both sides

The result was a "gravel straightener" for paving trails and small roads.

- We had some "straightener parts" for an attachment to a backhoe loader, which started the idea of putting it behind a dump truck. It didn't harmonise very well in the beginning. Th0 attcahment for the backhoe loader is mounting in front of the machine where we would like it to be on the back of the conveyor belt, and if we put it together, it would all end backwards, says Brian Vinkelgaard, who has engineered and built the attachment.

At the same time, the people in the company would like new features on the machinery.

- Something that stands out about our model is that it can bend in the middle, so we create a "rooftop profile" on the gravel path. It was not possible to find anything in the market where that function was available, says Brian Vinkelgaard. 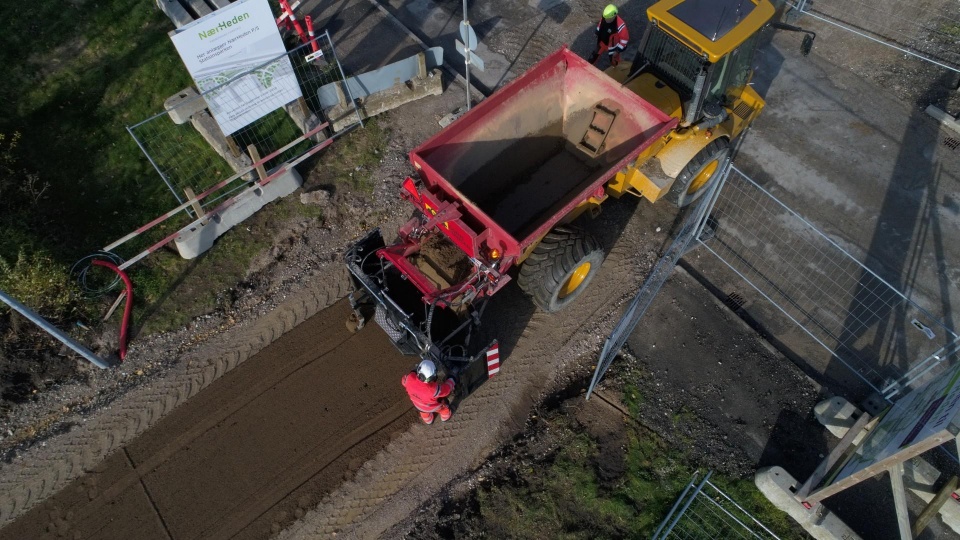 Fewer people for the job.

With the newly developed machine, the work is made easier.

- Previously, we did the work with an excavator and by hand power, where we walked and levellev it afterwards. You couldn't make it as precisely as we can here. So it required an excavator and two to three men with rakes, says Mogens Post, the construction site foreman.

With the new solution, you can mark the route in advance, so that you get the perfect layout instantly.

The driver can control the rear using three cameras. He manages the driving speed, so the box is always filled with gravel.

The "machine manager" walks behind the machine application, and control the height of the gravel layout, to avoid one side being higher than the other.

I need to be aware that the layer thickness is the same all the time. It is important on this task where it is some clay gravel. But it is also a matter of money that not too much material is used. It's hard to hit 100 per cent all the time, but then we just have to go fast with a rake and fix the little things, says Mogens Post.

The machine can do more

In addition to the economic benefits of fewer people for the tasks and more precise material consumption, the machinery is also better utilised.

- The machine has gone from being able to do one thing, to become a multifunctional machine. It's all made so it is easy to separate and it can be assembled or separated in an hour, says Brian Vinkelgaard.

The "gravel straightener" can be extended in width from 2.5 meters to 3.5 meters. Gorm Hansen has applied for a patent on the gravel cutter.

Link to original article from www.maskinteknik.dk below